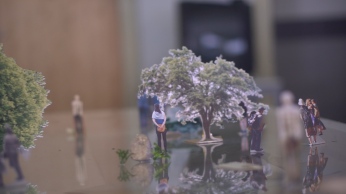 I met a friendly geologist in a food market. In those days I was conducting a small interactive ritual with strangers and stones. I decided to revisit this stranger in his work place, the National Geologist Museum, we spent 3 hours talking about earth.  I got as a gift three pairs of shells he dug out from a layer dated 7000 years old. I chose the Assistens cemetery for our third meeting, a place in which people cool off in silence and have a beer among the dead. He told me about the origin of some stones used for the graves and about fossils, in our situated conversation we realized they are creatures that became their own grave. That evening, to my surprise, we agreed we will invite other people for a guided walk in the cemetery. On our fifth meeting we performed “A Place That Moves” a guided visit to the cemetery unifying his scientific knowledge of migratory stones, his fossils and stones collection, and my ritualistic and symbolic inclinations.